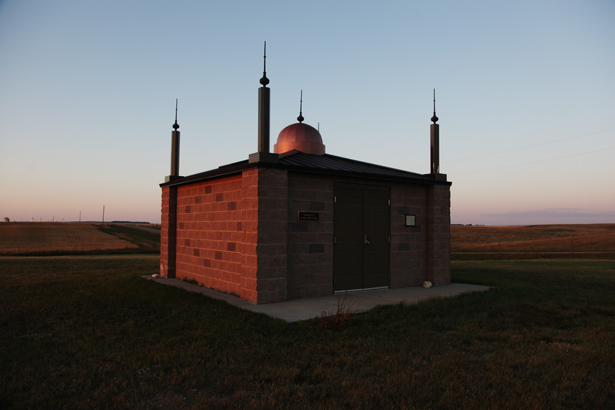 I had a welcome memory spark during a recent graduate seminar discussion of Omar ibn Said’s 1831 autobiography, The Life of Omar ibn Said, a text written in Arabic and an account of his enslavement in the United States.

The Arabic text and English translations are available online at the Library of Congress and University of Wisconsin Press published an Arabic/English edition of the book in 2011, with an excellent introduction by Ala Alryyes.

As Alryyes shows, Said’s narrative, especially its rhetorical structure, illuminates much complexity about early Muslim experience in North America. Said’s writing also reminds us that Arabic literature is American literature, and that Islam has a very long history in the United States.

And in North Dakota.

As we talked together in seminar, I remembered one way this history was made especially visible a few years ago via the “30 Mosques” performance art blog.

First, here’s the promo video from filmmaker Bassam Tariq’s current artist page, where he and co-creator Aman Ali explain their “30 Mosques in 30 Days” project. In this clip, they use the phrase “trickle up” to refer to the political contexts and paradigm shifting energies of their work.

And here is their 2010 blog entry for “30 Mosques” which introduced an international audience to the beautiful prairie mosque in tiny Ross, North Dakota

The stories of the Ross mosque, its founding community and its history in North Dakota, are all fascinating in their own light, but what this blog post also highlights is the impact such “trickle up” work can have on the ways we collectively imagine history, and by extension, the ways we collectively analyze the present and imagine our future.  I have shown this blog post to many classes since 2010 and students are consistently surprised, fascinated, and creatively unsettled by “what we didn’t know.”

With continued gratitude for their artistic labor and to update you on the work of the co-creators of the original Ramadan Road Trip and the “30 Mosques” project:

Aman Ali is a standup comedian and filmmaker based in New York City. His ongoing work is featured on his own website here.

Bassam Tariq went on after the 30 Mosques project to expand his work as a filmmaker and video artist. You will find his other projects here, and here is the trailer to These Birds Walk, the award-winning film he co-directed with Omar Mullick.