On January 1st, the public domain saw the first large-scale infusion of works since 1998. Any work published before 1924, now is in the U.S. public domain. This is an almost unprecedented catalogue of books, journals, films, and music has entered the public realm. This means that these works have been freed from almost all restrictions on how we use, distribute, contort, convolute, remix, and enjoy these works. Duke Law School offers helpful explanation of what this means. The HathiTrust has collected an overwhelming catalogue of digitized material that entered the public domain this year, and you can access the full texts here. 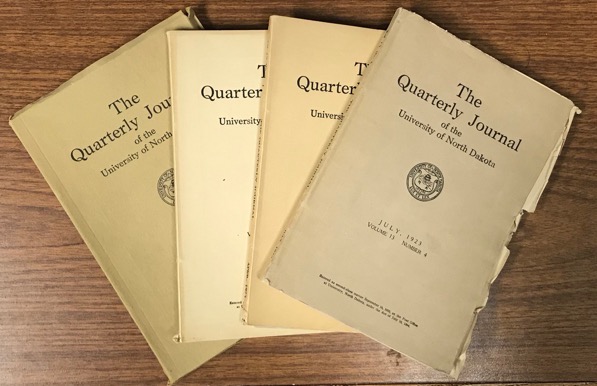 This has an impact on us here at North Dakota Quarterly. While we have no reason to believe that we ever renewed copyright on any of our early works, we also have almost no idea what the agreements were between the Quarterly Journal of the University of North Dakota (as it was then known) and our authors. In effect, these issues were orphans and would require a time consuming and expensive search for their status for someone to be sure that they were free of copyright entanglements.

In 2017, we took a little risk and released the digital versions of these works on the HathiTrust under a Creative Commons By-Attribution, No Derivative license, figuring that we, at least, have the right to distribute the entire volume. Unfortunately, the no derivative aspect of the license made it difficult for anyone to repackage, rearrange, or remix this volume. As this work has now entered the public domain, they are now free of those constraints!

Lest one think that this is just some dusty back catalogue of a little magazine, for folks interested in the history of North Dakota and of the University of North Dakota, volume 13 (1923) of NDQ is a relatively untapped resource. Issue 13.4 is dedicated entirely to the history of UND, with articles written by various faculty luminaries of the “early days” including John Gillette, Vernon Squires, Earle Babcock, and the well-known financier and class of ‘03, John Hancock. Issue 13.3 focuses on the history of the state of North Dakota with articles dedicated to the pioneer physician, the North Dakota bar, politics, banking, religion, and, of course, farming. Issues 1 and 2 were more general issues with articles by faculty and local scholars, and with ample overlap with the themes of the last two issue of the year.

In short, this volume is among the most important volumes of NDQ’s early history or “first series,” and while it bares only scant resemblance to the journal of the 21st century, it speaks to the fundamental role that the Quarterly played is sketching out the “first draft” (to use a colleagues helpful expression) of the history of the state and the University. In this way, NDQ reflected the interests of its primary audience, people in the small, but growing body of intellectuals, academics, and professionals in North Dakota who sought to create institutions to support their priorities in the world.

Today, I like to think that NDQ continues in that tradition, albeit with a wider audience, and, in terms of topics and genres, a more expansive view on how to shape our world. I’m just now starting to think about what to do with the newly released volume of NDQ, but the great thing about the public domain, is that it’s not up to just us here at NDQ!  Anyone can go and do something neat with it, and let us know what they did!