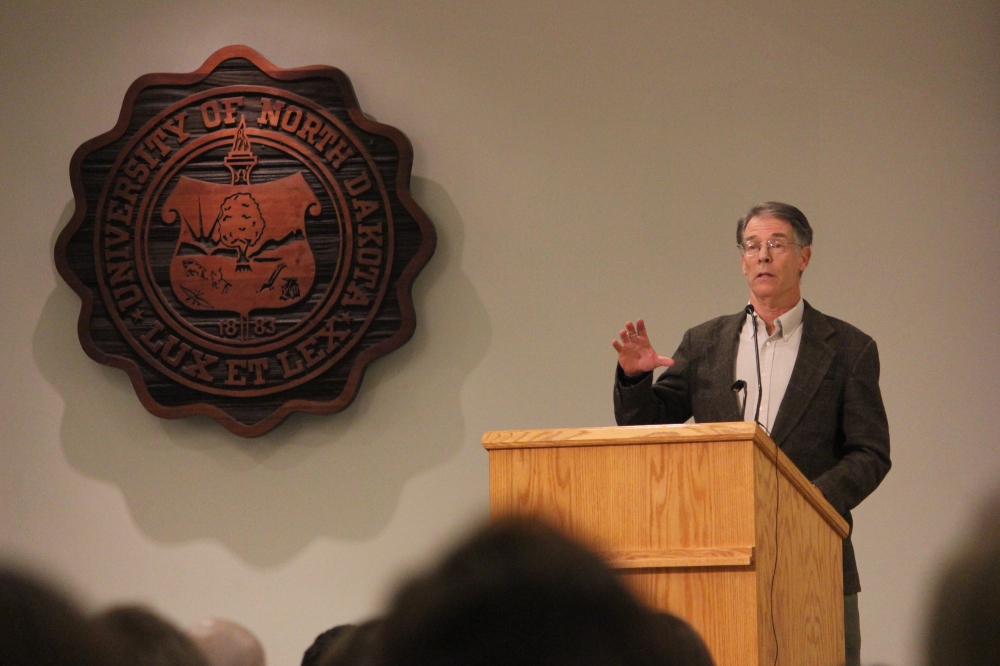 “Earth may be considered as a small spaceship with limited supplies or resources revolving around the sun with the human race as the crew and the United States and other highly developed nations as the officers. The entire crew is responsible for those actions which modify the ship’s condition, i.e. our natural environment. We ‘push the buttons’ that regulate the conditions, and so we contribute to the length of it flight and the endurance of its crew.”

These words, written by C.N. Nelson, appear in the Winter 1969 issue of NDQ under the title “A Call to Action.” The whole of issue 37.1 is dedicated to the subjects of environmentalism, ecology, and environmental education, with Nelson’s “Call to Action” leading the charge and appearing first in the lineup. What I like about Nelson’s manifesto is the way that it hums with subterranean currents of dissatisfaction and frustration — that, and I love this little spaceship metaphor, which recalls some of the works of science fiction writer Kim Stanley Robinson.

Robinson has been on my mind of late (though, in the spirit of full disclosure, I will admit that this is nothing new), and for two reasons. The first has to do with a conference paper I’ve been cooking up on his recent novel New York: 2140; the second relates to my course preparations for the fall 2018 semester, when I will be teaching a course on “Literature and Climate Change.” This course, which will be a brand new experience for me, is to form part of the core curriculum for UND’s newly launched undergraduate major in Environmental Studies. And my plans for it, at the moment, revolve around tying contemporary discussions of climate change and ecosystemic shifts to the genre of literature that is, these days, increasingly referred to as “cli-fi” (or climate fiction). With any luck, KSR’s work will feature amongst those conversations (though, damn, his books are long — anyone who has experience teaching his stuff, I’d be interested to talk about schedule and pacing, specific texts, assignments, etc.).

In particular, Nelson’s comments brought to mind Robinson’s 2015 novel Aurora, which takes place almost entirely within the confines of a spaceship that has left earth and gone off in search of a substitute planet. The voyage has been a long one, though, and in the opening pages of Aurora, we learn that several generations have already come and gone, living out the entirety of their lives onboard the ship. It’s a beautiful book and one that Clarence N. Nelson (the full name behind the “C.N.”, and former President of the North Dakota School of Forestry, now Dakota College at Bottineau) would surely appreciate. This much, I think, is clear given the way he characterizes the “thoughtless exploitation” of natural resources that was happening in the 1960s, which have been managed at the behest of what he calls “An Alice in Wonderland Policy.” Nelson opens his call to action with a long epigraphic quotation taken from the famous tea party scene Lewis Carroll’s Alice’s Adventures in Wonderland, focusing on the way that the March Hare instructs everyone at the table to “Change places!” According to Nelson’s thinking, this is how natural resources and land have been managed in America up to this point (which, keep in mind, is 1969) — that is to say, via a manic process of abandoning one spot in favor of another, and leaving a mess of metaphoric breadcrumbs and teacakes (or literal oil spills and pollutants) behind. Nelson keeps the whole Alice conceit in play as he critiques this wanton practice, observing that “we have been stealing from unborn generations, the tea-cakes to which they are entitled. They will have to subsist on the crumbs and spilled milk left by the “March Hares” of today who do not wish to discuss it, the “Dormice” whose apathy is characterized by their lethargy, and the “Mad Hatters” who take advantage of positions of leadership to move on to a clean cup, leaving nothing but empty, soiled china for those who follow.”

[You gotta love a geologist who isn’t afraid of literary allusion.]

In Aurora, Robinson cloaks a very similar argument in the colorful trappings of speculative fiction. As the spaceship Aurora seeks out new, habitable planets, its occupants (who are now third-generation ship dwellers and so have never set foot on earth) become dimly aware of an important truth: Earth was always the best that the galaxy had to offer humanity. I don’t want to spoil the novel for those who haven’t read it, so I’ll just offer a gloss on its lessons by telling you that, in the end, the ship’s inhabitants decide to reverse course and to return to Earth with the idea of giving it a second shot. The moral is an accessible one, on the surface: take care of what you have now; be grateful for it; don’t abandon it for a new, clean cup.

Practically speaking, of course, this moral is difficult to put into practice. But that’s what I’m hoping to do in the fall semester when I discuss the likes of Robinson and Nelson with a class of Environmental Studies and / or English majors.