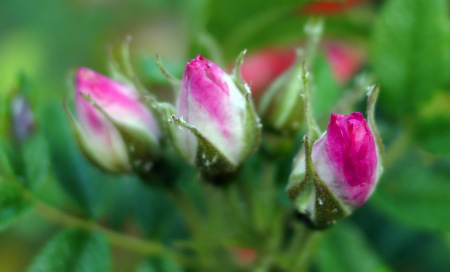 North Dakota Quarterly is around to announce the poems and stores nominated for this year’s Pushcart Prize: The Best of Small Presses.

The crystal clocks tick their petals
away. The bird’s song pulses, a severed
vien, now almost empty of notes.

I love all this emptiness, this warp
and transparence, the whorl
of atoms I brush from your brow,

the ripple of brain matter in a cloud,
and the virtual haze, and trembling
train wires, the bees like pixels

from a dream. I thought a splendor.
I thought of you, tender, knelt in dirt,
looking for seeds to place inside

your ear for safekeeping. My infidel,
before the wind tears through our flesh:
one more photon for your tongue.

It takes 8 minutes and 20 seconds for the sun’s light to reach your tomatoes, the ones you had to wait until June to transplant outdoors. You had to wait until late August for them to soak up all that sun to ripen, and as they did, you lined the windowsills until you had enough tomatoes and enough time to squeeze and freeze them.

At night, after your son has gone to bed, you put New Order on Pandora, put a pot of water on to boil, fill a glass with gin and tonic, and fill the sink with cold water and ice. You weigh the tomatoes, cut an X in the end of each, and drop 8-10 of them at a time into the pot. After a minute, you ladle them out and transport them to the ice bath where, submerged, their skins unfurl like flowers. You drop more into the pot, then back over to the sink where you pluck tomatoes up and peel a few. Shuttling back and forth between pot and sink, you sing “Bizarre Love Triangle” and add more ice to the sink as needed and add more ice to your gin as needed. The peeled tomatoes are slick, so you are careful as you core and halve them, though twice you slip and slit the tip of your finger, which stings in the acid juice. Bent over the trash, you squish out the seeds and juice, toss the halves into a colander to drain. When done, you bag and tag the tomatoes with date and weight. After a few nights of this, your back aches from being bent, your feet from the tile. And your lovely kitchen, the one whose trim you lovingly painted white for a clean look – and it is a clean look, so long as it is clean – looks like an abattoir. Gin helps. New Order helps. But what helps most is knowing you have 45 pounds of home-grown sun-ripened tomatoes in the freezer ready to be turned into sauce.

One cool Saturday in early October, you will put all the bags of frozen tomatoes in the sink to thaw, and fill the large enamel canner with water and put it on to boil. It will take hours. You divide the tomatoes between two stockpots to cook down. It will take hours. You have plenty of time to sterilize jars and lids and get everything organized. You do not have plenty of burners, so this takes a little juggling and some creative use of the dishwasher’s hot rinse cycle. The canner is humming a bit but not yet boiling, and the sauce could be thicker. Have some coffee. Go play with your son. Water the houseplants. When the canner lid starts rattling and steam spits out sideways, it’s time. Ladle the sauce into the jars, and top off with two tablespoons lemon juice, to prevent spoilage. Wipe the rims and lids and screw shut. Carefully place the jars into the rack, the rack into the canner, replace the lid, and return to boiling. More waiting: 40 minutes until they’re done. Check email. Check Facebook. Check your checking account. When they’re done, remove to a heatproof surface and let cool overnight. It’s OK if your heart leaps a little every time a jar pops, letting you know that this age-old yet seemingly magical process has worked, has actually worked the way it’s supposed to. Label them and line them up on a shelf in the basement. Stand back and admire them, alongside the carrots and green beans and jams you put up earlier, tell yourself you could totally provide for your family if you had to, out here on the prairie, though you secretly know you would all be dead by November.

One frigidly brutally Arctically cold Sunday in January when you can wait no longer, use one of those jars. Maybe two. But no more than two, because that 45 pounds only cooked down to 7 quart jars, and it’ll be over 8 months before you can make more. Don’t waste them on some common spaghetti where you won’t really taste the tomatoes. This occasion calls for something special, something worth the effort. Pull out your recipe for pork ragú. Make a list. Go buy a two-pound loin, some onions and garlic. Don’t forget the wine. Open the wine as soon as you get home and pour a glass. Chop two onions. It’s OK if you cry. Peel and mince four cloves of garlic. Snip a few long sprigs of rosemary off the plant you dug up from the garden and placed in the window for winter. Strip its needled leaves and chop. Stop to smell the scent of it on your fingers. Salt and pepper the loin, and sear every side in a good amount of olive oil. Remove the meat and add the onion, garlic, and rosemary, using the juice released from the browning onion to help scrape the pot. Time to open the jar; do not rush this moment. Break the seal. Smell deeply, a sharp sweetness that cuts across months to the day you picked them. Pass the jar to your son, your husband. Smell deeply. Try to remember summer. Before you burn the onions, return to the kitchen and add the tomato sauce. Return the loin to the pot and let the meat braise, filling your house with its savor. When it’s falling apart, roughly shred the rest of the meat and stir into the sauce. Serve with big noodles, something that can take it – mafalda or rigatoni – and lots of freshly grated Parmesan. And more wine. It will take you a little over eight minutes to down the first plate. Stop. Lick your lips. Take a sip of wine. Note how the acid of the tomatoes, the wine, balance the rich fat of the pork melted into the sauce. Try to taste the second plate more slowly