Get a Taste of The Cherry Tree

Last week, North Dakota Quarterly was very excited to announce the publication of the first English translation of The Cherry Tree, Jurij Koch’s German-language Sorbian novella. Since then, its translator John K. Cox has been on the media circuit doing an interview on the local public radio station and in the local newspaper.

If you want to know what the buzz is about, you can download a copy of The Cherry Tree for free or get a low-cost paperback version on Amazon. Go here. 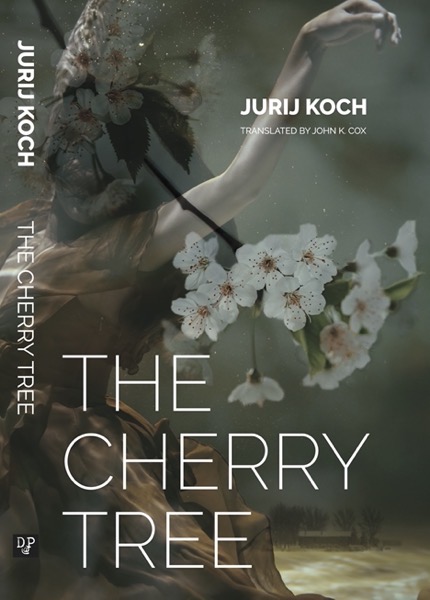 Or, if downloading a free book feels like just a bit too much of a commitment, read on to get a taste of the book!

It so happened that a man known as a braška, a wedding facilitator and table master, was noticed by three other people almost simultaneously. The first to see him was Sieghart, and this occurred when he stepped out of one of the travel trailers arranged in a block next to the drilling tower. It was almost eight in the morning, and his first shift was already behind him. He felt the warmth of the tea in his stomach, a sense of well-being that customarily grew with his second breakfast. And that was when Sieghart glimpsed the black-clad man on a moped. He was seated on it, wearing a top hat and tailcoat bedecked in random places with white and green bows and ribbons; as he drove, the adornments followed him and the airflow caused them to flutter like the paper tail of a kite. Sieghart had never seen a person like this, and the outfit aroused a feeling of childlike curiosity in him. The closer the braška drove, the clearer his features became. He had an old face with a thousand wrinkles, tiny traces of a duty repeated a thousand times, some practical activity done out of doors, bringing bread and blessings and satisfaction. The customary practice that he carried out belonged to a unity of work and pleasure; perhaps it was a continuation of the ways of his father. Who knew what exactly was pulling up beside him on this moped? How could Sieghart know what the colorful ribbons were supposed to mean, and the coat, and the hat?

Sieghart thought, And on a moped, at that. You can’t be serious. Still, he couldn’t articulate why the unusual man and his vehicle weren’t suited to each other. When the braška had drawn even with Sieghart, he raised his festooned hat and managed to bow deeply, as though part of the custom was to extend such a courtesy to everyone along his route. And then the man’s face was visible once more, the old furrowed countenance with its thousand trails inscribed onto the map of an existence. The braška didn’t neglect to greet him, either. He called out something to Sieghart, surely words of no consequence, about which all that matters is that they were heard, not necessarily understood. Perhaps it was even enough for them to be seen.

The braška had passed the drilling team’s base and was motoring off into the green of the open country, growing ever smaller, sinking into the terrain, dropping down into the bottomland. Both of Sieghart’s colleagues, who had just walked over, saw nothing but the fluttering ribbons—nothing of the face, the thousand-lined face.

“Did you guys see that?” Sieghart wanted to know.

Sieghart was overcome by anxiety that didn’t mesh at all with the feeling of comfort he’d enjoyed just a few moments earlier. He took a step towards the trailer, stopped, and then turned in the direction that the braška had driven, as if he could grasp what was going on by seeing one last corner of his outfit. Then he turned over his tin mug so that the rest of the tea, which he’d been holding for the entire time, came out in a broad arc.

His two colleagues didn’t know why Sieghart was suddenly so agitated. They looked at one another, shrugged their shoulders, and set to work. A diesel engine kicked into operation. Billows of black smoke twisted into the air.

Ena saw the braška, too. His journey could be tracked from their garden. A message flew along the edge of the forest. Everyone could see it. Slowly Ena relaxed her grip on the bundle of hay in her arms. It fell down and broke apart. She didn’t want to stand there, hugging straw, if the braška was out and about.

The forest, the dark rim of the nearby horizon, swallowed him up. The braška was riding across the moor. Somewhere out there a village would appear. They’d welcome him back. He was the object of attention wherever he went. It was the best kind of attention anyone could wish for.

As Ena turned around to go into the barnyard, her gaze fell onto the solidly rooted trunk of the beheaded cherry tree. Sap was collecting where it had been cut. It looked like a large drop of clotted blood. She laid her finger on the bleeding wound, as if she wanted to ease its pain.

Her grandfather was sitting on the weir at the forest pond. He had found a cozy spot. He could look out over the surface of the entire pond. And he looked the forest right in its big damp eyes. The crown of the tree was still lying in the same spot; it was floating and drinking. Some of its branches had gotten tangled up in the reeds. The rest of them either stabbed into the depths, where they were recognizable down in the clear water, or they loomed in the air, offering themselves up to the dragonflies.

“Hey, you!” the grandfather called out, without shouting with full force. His cry, intended for someone only he knew, cruised over the surface of the water, gliding gently. He called out once more, with somewhat more strength this time, and an echo came back at him from the other side. Otherwise, nothing happened. The old man looked eagerly at the smooth top of the pond, and then, unmistakably, the stalks of the reeds began to move, back and forth, like a group of people frolicking in a circle. From the thirsty crown of the tree emanated other movements as well. From the places where the branches stuck into the water, circles were forming. As they expanded in diameter, and flattened out, the rings were still strong enough, for there to be no doubt: something was happening.

“Hey, you!” the old man said once more, certain that an understanding had been established.

A clear, resounding masculine voice could be heard: “What do you want?”

It sounded as if his interlocutor was sitting somewhere in the swaying water plants and was using the pond as a bull horn, to increase the volume of his voice and gain access to a dimension to which he, as the inhabitant of another medium, was entitled.

“Nothing in particular,” replied the grandfather. “Just some conversation.”

It was an echoed response from the pond.

“About your realm,” answered the old man. “Things must be nice where you all are.”

“I don’t know,” the old man responded. “I hope it will be the fairy tales. Otherwise the world will be a wasteland.”

The man in the water laughed. It sounded as if he were making use of the full width of his mouth in order to express the pleasure he felt at this. And that mouth of his was as broad as the pond in the woods; the reverberation built up in the chambers of the forest. Suddenly the grandfather felt as if he had been dreaming, as if he’d dozed off, just for a moment.

He turned around, and there behind him stood the “governor of the feast,” beside his moped. The braška had apparently been there for a while. Maybe he’d been the one laughing; maybe he’d carried on that conversation. At this point, nothing was obvious anymore, nothing clear-cut. Now doubts were again appropriate, and the fairy tale that had commenced was reaching its premature end.

“Oh, it’s you,” the grandfather said. “Whose wedding are you inviting people to?”

“To the other one,” answered the man in the tailcoat and top hat.

“And when will you make the rounds for Ena and Mathias?” the grandfather asked next.

The braška reached into the inside pocket of his coat and pulled out a small red notebook. He thumbed through it, and said at last, “Soon. They’re up soon. I will take care of everything to your satisfaction.”

Water was dripping from the hem of his tails. Aquatic vines clung to his boots. A green frog leapt off of the moped seat when the motor began to clatter. The man with the thousand furrows on his face, which resembled the map of an existence, rode away. The bows fluttered behind him like the paper trail of a kite.

The grandfather got laboriously to his feet. He stood up as if he were just waking from a delightful sleep.

He stretched his arms and legs, and even yawned; and he leaned down to the water. With great effort he managed to get his fingers around one branch of the cherry tree. He shoved the crown out towards deeper water. “It’s better this way,” he said.