Short Take: Revenge of the Analog

Over the holiday break, I read David Sax’s Revenge of the Analog: Real Things and Why They Matter (Public Affairs 2016). It’s a popular book and Sax is a journalist who write on culture and technologies for a range of periodicals. His book was intriguing to me not because he has an answer to why there is a persistent interest in the analog (or at least a simulacrum of the analog), but because he identifies a number of seemingly incongruous places where the “analog” practices appear to running counter to the prevailing trends of digital life. 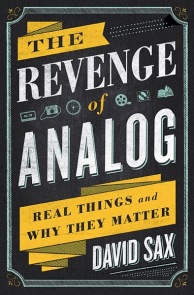 In some ways, his book echoes recent interest in the “slow moment” which NDQ critiqued in a special issue last year. For many of the contributors to that volume, “slow” represented an antidote to the speed of life (and particularly capitalism) in the contemporary world. Sax, in contrast, argues that the analog isn’t a challenge to capitalist practices. In fact, one of his examples is Shinola which is a Detroit based company that specializes in luxury watches, leather goods, bikes, and, now, turntables (of course). Another example is Moleskine notebooks which he recognizes as a deliberately crafted corporate product marketed as a practical tool for members of the “creative class.” Sax talks to the small-time book seller, the owner of a vinyl pressing factory, and entrepreneurs looking to profit on the resurgence of film. He presents these individuals as not as romantic, marginal or radical figures looking to scratch out a living at the margins of the global economy, but rather figures who recognize the potential to find profits among communities who embrace technologies and experiences that run counter to prevailing trends in our digitally mediate world.

Sax’s starts his book with a reflection on the recent resurgence in vinyl records. He looks beyond audiophile arguments for the superior sound of vinyl (which may be valid, but only at price points way beyond the means of the average vinyl record buyer), and considers the rituals associated with the use of vinyl. The removing of a record from its dust cover, the cleaning of the surface, the placing of the stylus on the grooves and the endless fussing with tracking, tone arms, and cartridges. Even the need for separate components and cables and space for the records and the gear involves a spatial commitment to the experience of playing music that goes beyond what is required for digital or streaming music. In other words, the analog, at least for Sax, is physical. Books require bookstores, records encourage record stores and vinyl pressing factories, and film requires bulky manufacturing plants. Sax explores the world of board game cafes, the Detroit based workshop of Shinola watches, and cafes of Milan during fashion week where cognoscenti sip Peronis and sketch notes in their Moleskine notebooks.

Sax’s book got me thinking about the link between the spatial and the analog. Increasingly, I have started to recognize that digital practices offer ways to de-spatialize our practices of every day life. Digital audiophiles, for example, take up virtually no space and can move without particular ceremony or ritual from one computer to the next instantly. The modern digital storeroom is distributed across multiple computers, servers, and disks and is simultaneously everywhere and nowhere.  The analog, in contrast, whether it’s a physical notebook or an object or a site, is explicitly spatial.

Consider, for example, the impact of hacking on the recent presidential election and the strange emphasis on building a physical wall between the US and Mexico. The tension between the digital (hacking) and the analog (a wall) in our popular imagination is irrefutable. Spatiality gives national governments, and communities a sense of control and command over their their world. The analog world described by Sax is one shot through with these moments of control and possession. We can hold a vinyl record, destroy a Moleskine notebook, and watch chemicals develop a photograph. So perhaps our desire for the analog has more to do with our desire to hold and control and act as physically defined agents in a world increasingly mediated by elusive digital data and technologies and seem to dance just beyond our grasps.