This week, we’re being a little experimental and expanding the media that appears on the NDQ page. We’re collaborating with the Caraheard podcast to bring some audio goodness to our readers. Enjoy!

Bill Caraher and Richard Rothaus were lucky enough to have a chance to sit down with Kim Stanley Robinson at this years University of North Dakota Writers Conference. For those of you who don’t know, Kim Stanley Robinson is among the most decorated, recognized, and respected science fiction writers in the world right now. We chat with Robinson about his massive and influential Mars Trilology. This work is not car chases and laser beams but elaborately constructed landscapes and psychologies, which as Robinson himself notes, evoke the feel and drama of the 19th century novel set in the 21st century. 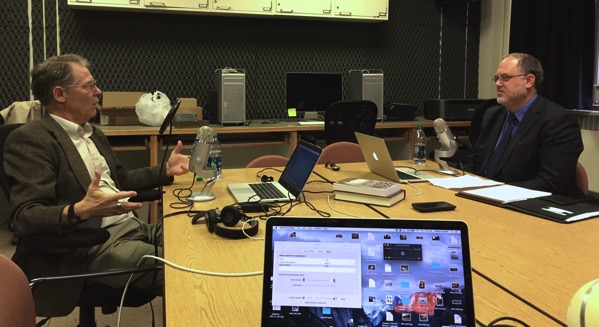 For our archaeologist audience, the 19th-century texture of Robinson’s great trilogy will feel familiar as its emphasis on landscapes and every day life echoes contemporary archaeological sensibilities. The work of a research team on Mars offers all of the mundane drama of an archaeological project set against the backdrop of the red planet. Robinson constructs a Martian society as it develops over nearly a century and interweaves the personalities and politics that come to dominate the red planet as it struggles to define its relationship to both earth and humanity.

We only scratch the surface of Robinson’s work on the podcast, but we do explore the various places where Robinson’s science fiction and archaeology intersect in an entertaining and wide ranging conversation. We were also fortunate enough to be joined by Robinson’s Writers Conference assigned driver, Dr. David Haeselin, who has a couple of nice interviews with Robinson forthcoming in various publications. We’d be remiss if we didn’t thank, once again, Prof. Crystal Alberts, the director of the UND Writers Conference who fit our recording into a hectic week of events. Finally, we have to thank the man himself, Kim Stanley Robinson, who was so generous with his time and willingness to share his wide ranging interests with us.

It seems fitting that we start our chat with the Moon landing and Richard and Stan share their experiences as 17 year olds at  Elgin Air Force base. Richard remembers seeing the awesome SR-71 Blackbird in his backyard.

For those of you unfamiliar with Robinson’s Mars Trilogy, here are the links.

And a related work of short stories titled The Martians (1999).

For more on the landscapes of the Bakken in North Dakota, check out Richard Rothaus et al.’s contribution to The Bakken Goes Boom, “100 Miles of Wild: North Dakota Badlands Transect” (p. 225-254).

Who is Richard Rothaus anyway? Well, here’s his CV.

If you want to check out some of the early imagery from the Viking mission to Mars. Here is a globe of Mars based on Viking images. Here are more from the two Viking orbiters.

We talk about 18th, 19th, and 20th century impressions of landscapes and their influences on landscape archaeology. Here are two books that shaped Bill’s thinking:

Stan mentions John Muir on the Sierras. You can download some Muir’s writing here. Ansel Adams is pretty ubiquitous, but you can get a good idea of the scope of his work here. Henry David Thoreau’s journals are also available online. Check them out here.

Bill mentions using cameras to produce 3D structure-from-motion images. A bunch of people talk about that here. Richard mentions sketching, so here are some of his sketches.

Stan talks about tectonic uplift on the western part of Crete. Here’s a nice discussion of that (pdf). He also mentions the site of Gortyn, Zakros, and Lyttos (although not be name). Lyttos is here.

We talk about the Corinth Canal a bit and think about whether such a project could be undertaken in antiquity. You can’t talk about the canal or Corinth or the Diolkos without talking about Pettegrew.

We discussed space elevators, and Stan gave credit to Sir Arthur C. Clarke and Charles Sheffield for imagining them in science fiction.

Richard was responsible for producing this (and the last few) Caraheard podcasts. So improvements in sound quality are all his doing. Bill, on the other hand, has done all he could to undermine Richard’s mad mixing skills. For example, this is where Bill turns on his microphone in the podcast.

Bill wrote a blog post on the archaeology of Red Mars.

Stan mentions his 2002 book The Years of Rice and Salt, as well as Donald Blankenship at Texas and going to Antarctica (and publishing this book based on his time there).

He also previews a radio play that he’s doing with Marina Abramovic at the Arthur C. Clarke Center at UCSD.

We dilate a bit on the Kensington Runestone.

If you want to know more about Google Mars, go here. Here is something that talks about the levels of passes in the High Sierras.

Richard promotes my book (second link in these show notes, but it’s free!): The Bakken Goes Boom: Oil and the Changing Geographies of Western North Dakota.

Richard can resist talking about his truck, again, and it’s not a Caraheard podcast without a mention of Tom Isern.