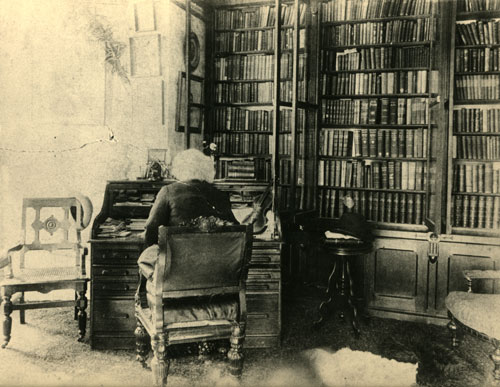 Among the finalists for this year’s Gilder Lehrman Lincoln Prize was Picturing Frederick Douglass: An Illustrated Biography of the Nineteenth Century’s Most Photographed American, by John Stauffer, Zoe Trodd, and Celeste-Marie Bernier, with an Epilogue by Henry Louis Gates and an Afterword by Douglass descendent Kenneth B. Morris Jr.

Picturing Frederick Douglass introduces readers to Frederick Douglass (1818-1895) as a visual performance artist and an active creator of “art for democracy” in his own portrait photography sittings. These sittings were essentially collaborative art works co-composed with various photographers over decades. We also discover in the book a less well-known aspect of Douglass’s intellectual history – his writings on photography as art, and on art as political action.

The book contains a catalogue raisonné, a full appended gallery of all 160 currently documented distinct Douglass portraits, but features as its real photographic center a more selective gallery of 60 of the portraits, beautifully reproduced and more fully annotated. This image gallery starts with the first known photograph of Douglass in 1841, taken only three years after his escape from slavery, mving across decades of his life as abolitionist, journalist, author, diplomate and public philosopher, and concluding with a somber deathbed image from 1895.

As the introductory essay argues, each picture is itself a “performance of citizenship” and a visual assertion of Douglass’s social and political identity.

Here are just three of the photographs, taken from online sources for your access from our blog, but reproduced in outstanding quality in Picturing Frederick Douglass:

Douglass at his desk while serving as a diplomat in Haiti, circa 1890

And a photo that has always been among my favorites of Douglass, taken while he worked in his study at his Cedar Hill home in DC, also circa 1890

Picturing Frederick Douglass then adds a second gallery of images made of -and about- him during his lifetime: drawings, cartoons, paintings, sculpture. As the editors suggest, and the images support, this gallery in relation to the first collection of his actual photographs illuminates “a war waged over Douglass’s visual persona. On the one side were [his] photographs and the images based upon them; on the other side, caricatures and distortion.” The two galleries demonstrate that this long 19th century war over images was deeply political and fully enmeshed in American conflicts related to democracy, race and civic equality. Douglass’s own careful labor to artistically compose his portraits fed his growing interest in the social power of art: “Douglass recognized that visual wars could affect political and military conflicts, noting that ‘the moral and social influence of pictures” was more important in shaping national culture than the ‘making of its laws.’” (77) A third gallery within the book shows the visual legacy of Douglass’s photographic images in subsequent art, with a special focus on more recent mural and poster art.

Picturing Frederick Douglass also includes four Civil War era writings on photography by Douglass, works less familiar to even longtime readers of Douglass, and writings that reveal a thinker deeply engaged with transatlantic 19th century philosophical and artistic questions. Douglass writes in these pieces as a social philosopher pre-occupied with human complexity, political freedom, and the power and peril of photography as a democratic art form.

Best to simply turn here to Frederick Douglass himself, from his “Lecture on Pictures,” delivered in 1861:

“I have said that man is a picture-making and picture-appreciating animal and have pointed out that fact as an important line of distinction between man and all other animals. The point will bear additional emphasis.

It lies directly in the path of what I conceive to be a key to the great mystery of life and progress. The process by which man is able to invent his own subjective consciousness into the objective form, considered in all its range, is in truth the highest attribute of man’s nature. All that is really peculiar to humanity, in contradistinction from all other animals, proceeds from this one faculty or power. It is that which has sometimes caused us, in our moments of enthusiasm, to lose sight of man as a creature, finite and limited, and to invest him with the dignity of a creator.

It is said that the best gifts are most abused, this among the rest. Conscience itself is misdirected: shocked at delightful sounds, beautiful colors and graceful movements—but sleeps at ease amid the ten thousand agonies of war and slavery.

This picture-making faculty is flung out into the world like all others—subject to a wild scramble between contending interests and forces. It is a mighty power, and the side to which it goes has achieved a wondrous conquest. For the habit we adopt, the master we obey in making our subjective nature objective, giving it form, colour, space, action and utterance, is the all important thing to ourselves and our surroundings. It will either lift us to the highest heavens or sink us to the bottomless depths, for good and evil know [no] limits. A man once fairly started in the wrong direction runs with every increasing speed like a frightened child in the wilderness, from the distant echoes of his own footfalls.

All wishes, all aspirations, all hopes, all fears, all doubts, all determinations grow stronger and stronger precisely in proportion as they get themselves expressed in words, forms, colours, and actions.” (132-133)

There is this and much more in Picturing Frederick Douglass to provoke hard thinking in our own era of political picture-making and wars over “images,” media and political art.

And here is a quick link to the Frederick Douglass Papers digital archive at the Library of Congress.

Editorial Note: We were delighted to learn that our former UND English Department colleague and NDQ editorial board member (and current NDQ contributor) Michael Anderegg will also be honored as a finalist for this year’s 2016 Gilder Lehrman Lincoln Prize.

Michael’s latest book Lincoln and Shakespeare shares the finalist honors with a number of other outstanding books in addition to Picturing Frederick Douglass, including Jonathan Sarna and Benjamin Shapell’s Lincoln and the Jews and Eric Foner’s Gateway to Freedom: The Hidden History of the Underground Railroad.

This year’s winner of the Lincoln Prize is Martha Hodes, for her book Mourning Lincoln.

We offer our warm congratulations to Martha Hodes, and to Michael Anderegg and the other finalists, and we look forward to reviewing Shakespeare and Lincoln in NDQ soon.